The automotive industry is one of the largest groups of TV advertisers there is. And for good reason. There are so many types of cars designed for different types of drivers across a wide variety of budgets and demographics that carmakers need to cast a wide net to reach them all.

But that doesn’t mean young buyers can’t be reached as well. VIZIO recently used the marketing analytics service  Upwave to conduct an independent review of three ad campaigns run by auto brands to see what similarities might exist between them. We found that across all three brands — spanning entry-level, mid-tier, and luxury models — the ability to both reach and influence younger consumers aged 18 - 24 had a notable impact throughout the entire sales funnel.

The first was a budget model campaign, designed and priced for a younger audience, in many cases perhaps a first-time new car buyer. For starters, the campaign drove a statistically significant lift of 24% in Favorability among the 18 - 24 age group… the largest for any age group monitored. 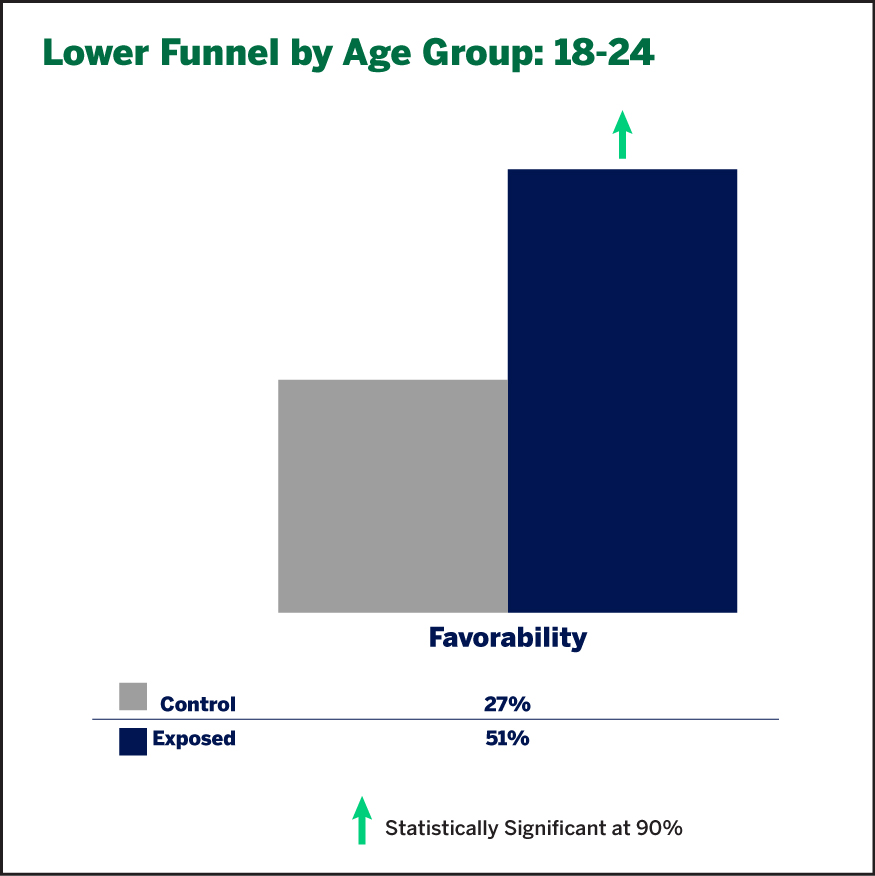 And among viewers with annual incomes between $25k - $50k — a range consistent with younger demographics — the ad increased Purchase Intent from 6% for the control group that didn’t see the ad to 11% for those who did. 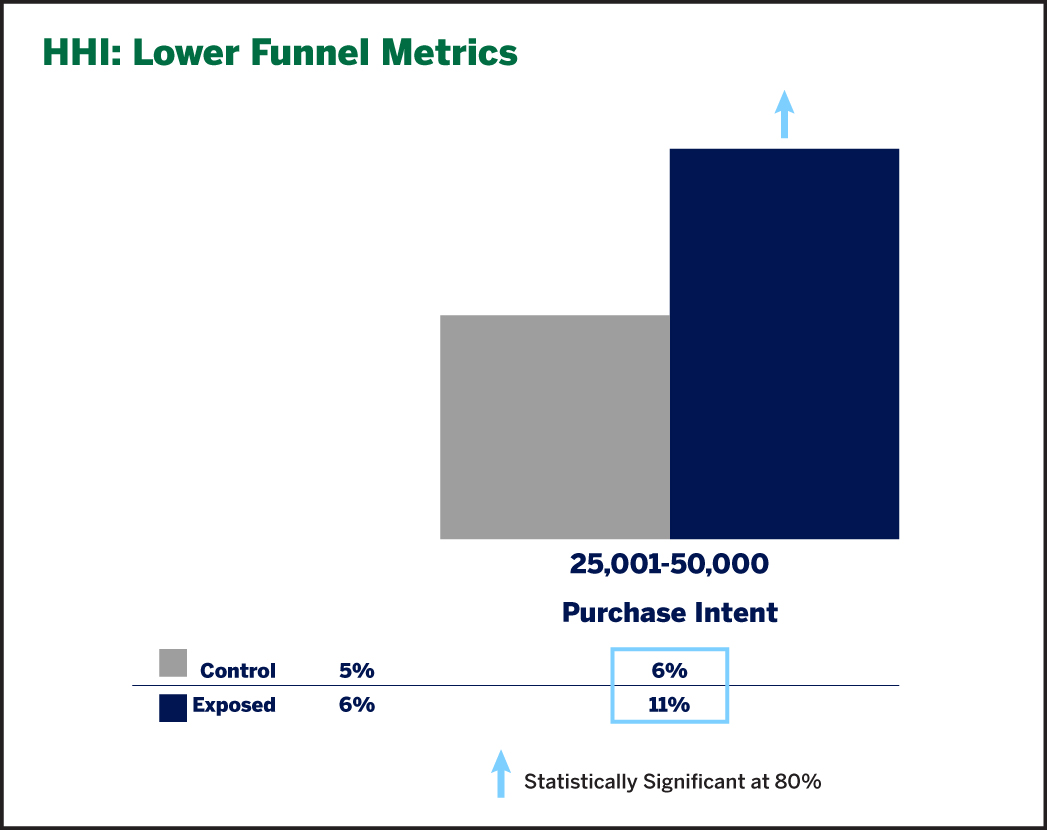 These results were perhaps expected for a car designed and priced for entry-level younger audiences. But many younger audiences are past the “starter car” phase and ready to move to a more mid-tier model. So we examined another campaign promoting exactly that.

We found the mid-tier model campaign for an electric vehicle was particularly effective in driving statistically significant increases with the 18-24 age group across upper to mid funnel metrics like Awareness, Ad Recall, and Familiarity. 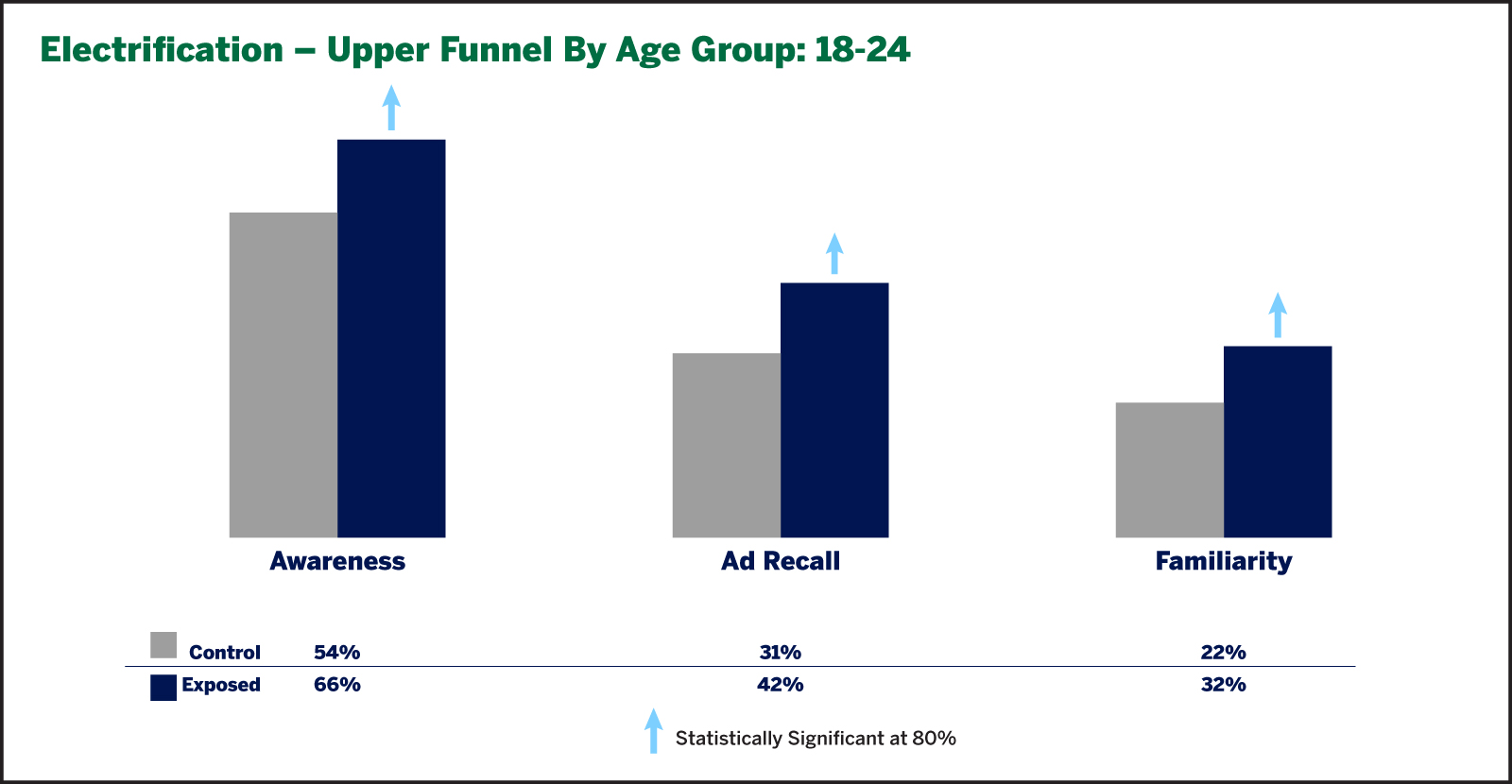 As you can see, Awareness jumped from 54% among the control group to 66% for those who saw the ad. Ad Recall similarly jumped 31% to 42% across the same groups, while Familiarity increased from 22% to 32%

Additionally, these jumps in upper funnel metrics contributed to similar statistically significant increases in lower funnel metrics for the same age group. The chart below illustrates this, as the 18-24 audience demonstrates above-benchmark lifts in Consideration (25% -> 37%) and Purchase Intent (12% -> 23%) 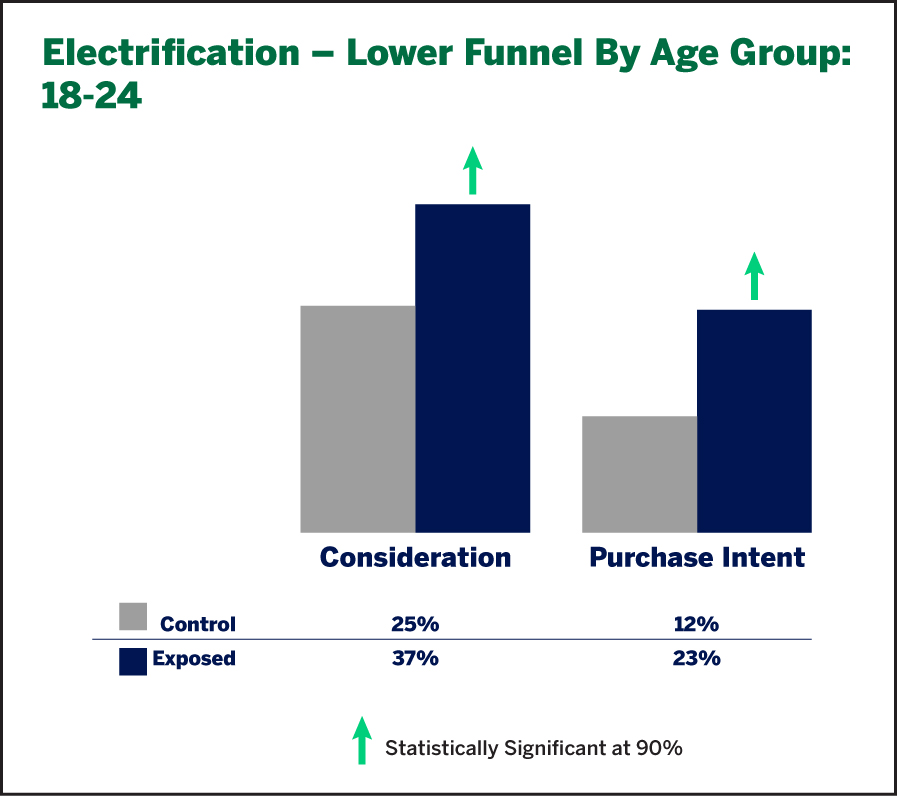 Interestingly, the campaign also drove a significant increase in Purchase Intent among consumers with an annual household income of $25k-$50k — from 6% to 13%... nearly the same as in the budget model car noted above. 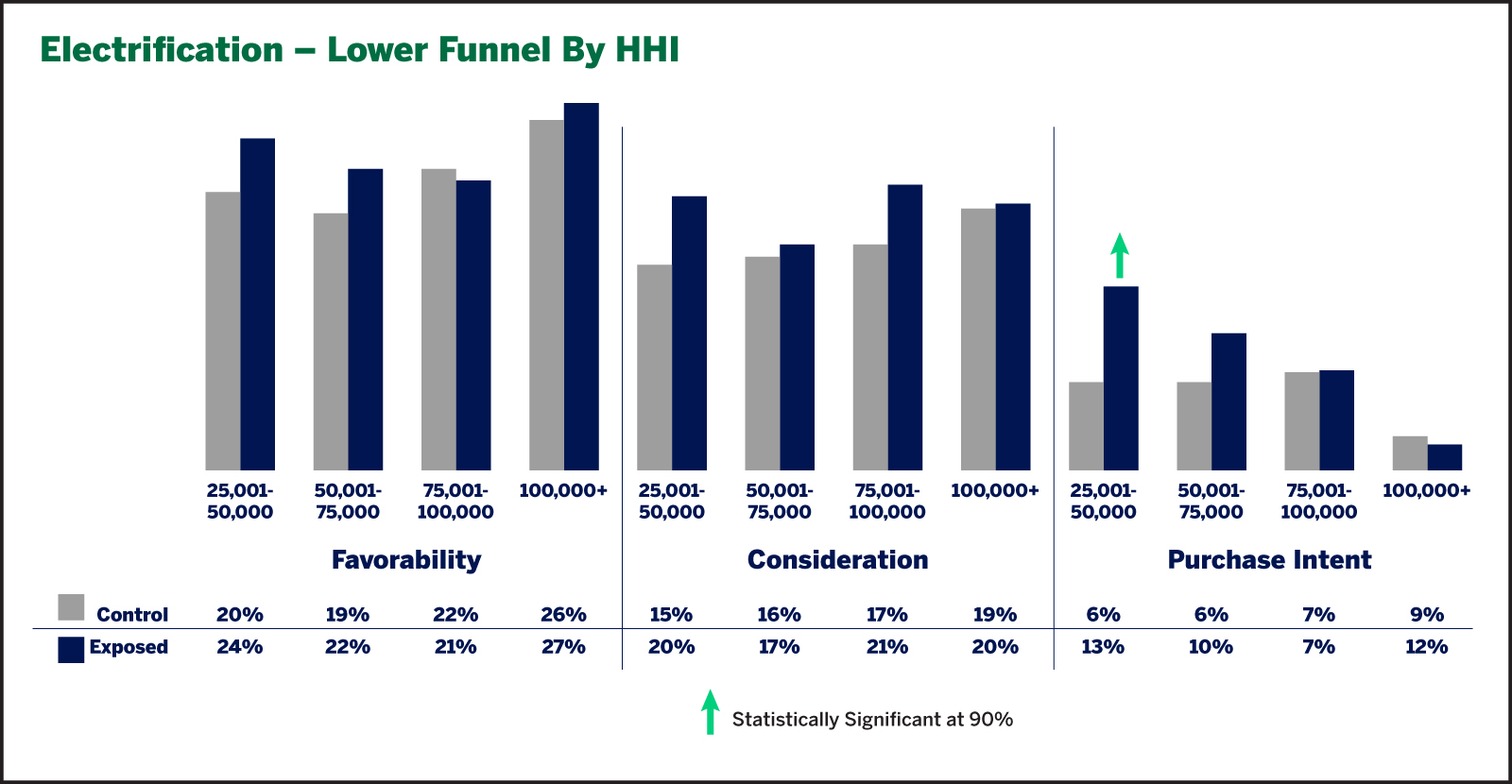 You’ll note how this performance may have been driven by the fact that this group was among the highest levels of baseline awareness across all brand health metrics, suggesting they are already in the third phase of the purchase funnel.

Now, as we all know, not all car branding efforts are designed to drive an immediate sale. Sometimes it’s about planting a seed for the future, generating the desire to “one day” purchase that dream car.

So we took a look at the results of a luxury model campaign with a specific focus on the 18-24 age group. In this case, the automotive manufacturer sponsored one of the entertainment hubs on the VIZIO home screen, targeted at audiences identified as interested in automobiles (dubbed “auto intenders”).

While the campaign drove statistically significant increases in Awareness across all age groups, the highest increase occurred in the 18-24 age group, with a 15% lift. 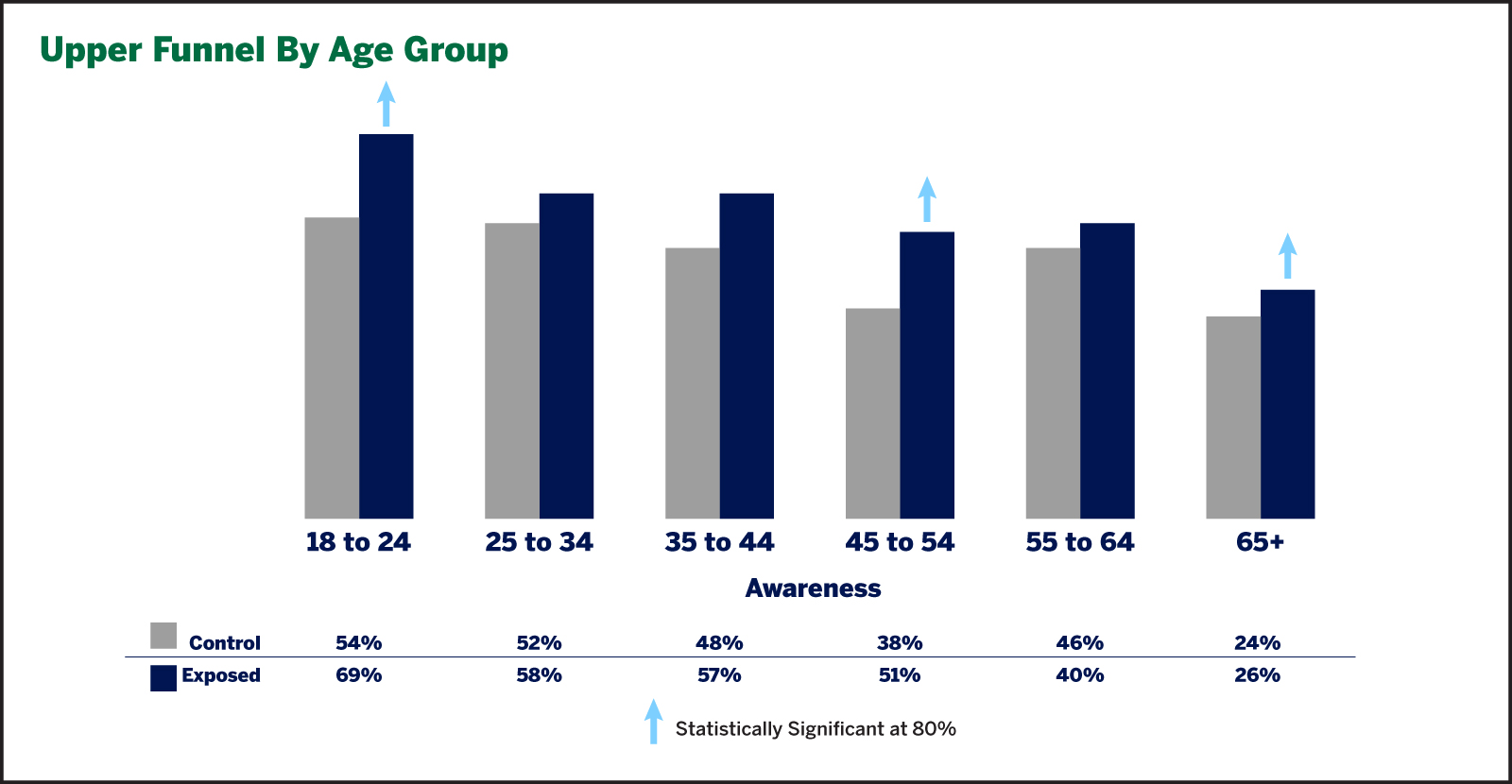 That’s supported by the increase in favorability among those  with an annual household income of $25k - $50k — from 41% control to 52%.

Across the three campaigns, we noticed significant increases across upper, middle, and lower funnel KPIs for younger audiences that saw ads from car manufacturers at multiple price tiers.

While this particular study focused on younger demographics, that’s certainly not the only audience carmakers can reach across smart TVs. Stay tuned for more case studies and insights that examine additional audience groups soon.