How VIZIO Is Driving Viewers To AVOD Services

How VIZIO Is Driving Viewers To AVOD Services

The key to TV advertising is eyeballs.

So for ad-based services, like the rapidly growing AVOD category, the more eyeballs you can get watching your service, the better.

However, with so many competing services all vying for a share of those eyeballs, what’s an AVOD provider to do?

Content is the easy answer, but an incomplete one. Sure, having the programming viewers want will drive traffic to an AVOD service. But that’s only if viewers know it’s there. AVOD services can do much more to market their content than just hope viewers search for a particular program and find it on their service.

That’s where the VIZIO Home Screen comes in. As the first screen viewers see when they power on their device, the Home Screen is a powerful way to promote not only AVOD apps, but the specific content available within them.

We recently reviewed the results of three different AVOD services promoting themselves on the VIZIO Home Screen to learn what kinds of strategies drove the most traffic, user acquisition, and effective cost of advertising. We worked with Mobile Measurement Partners, who aggregated our clients’ media buys and determined how ads drove people to their app.

Sharing the results with our clients allowed us to determine how promoting their apps and content on the VIZIO Home Screen increased traffic from all types of customers — new, returning, and current.

The services ran their promotions across different strategies, timeframes, and budgets, so each had a different takeaway.

The VIZIO Home Screen offers two types of placements — the Hero banner and the Discover banner. The Hero is the large carousel found at the very top of the screen, while the Discover option is further down and features smaller icons and less information.

We found that Hero ads drove the most overall viewer acquisitions and engagement to AVOD services. In this example, the AVOD service spent equally between Hero and Discover placements, yet received notably different results. 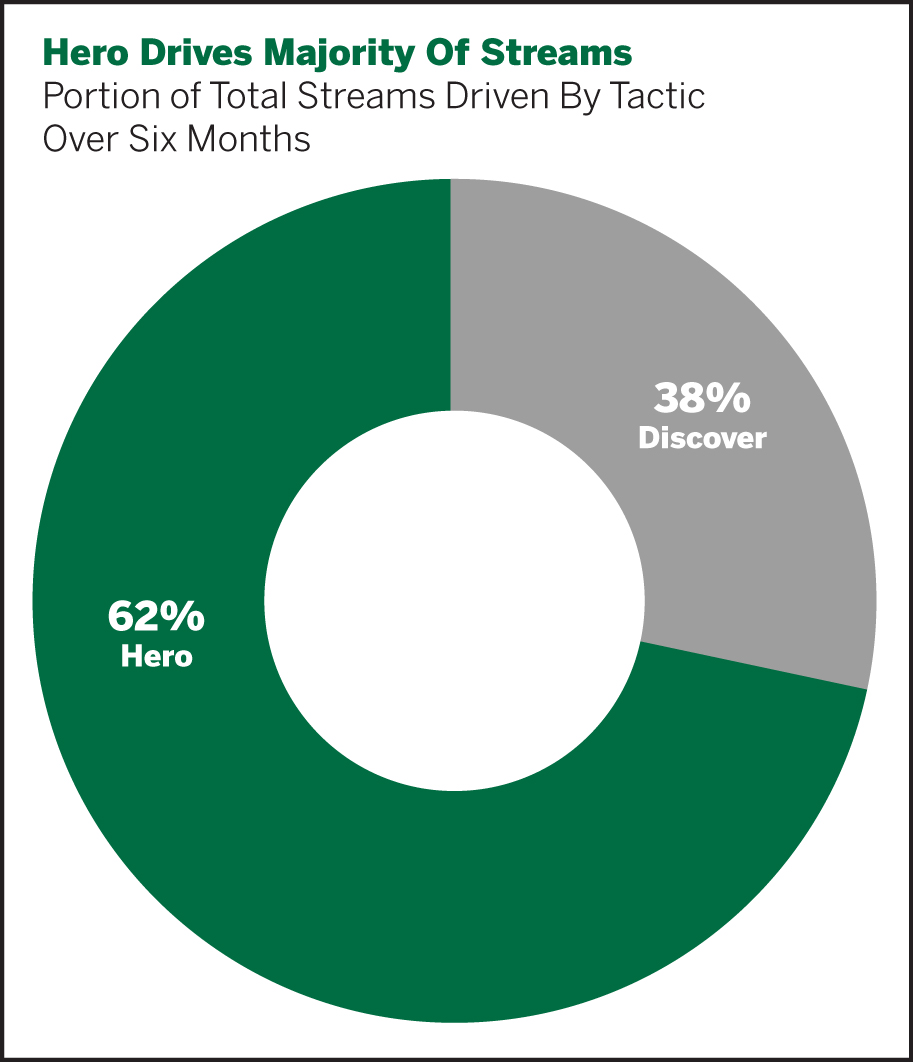 In other words, the best option is to use both the Hero and Discover options in tandem to get the most bang for your buck.

In other words, the size of the promotion budget is directly correlated to the increase in results.

While it may seem counterintuitive to increase budgets when cost-per-acquisition is high, we’ve observed notable gains in efficiency when spending increases. For instance, one customer doubled their budget from one month to the next, and as a result cut their cost-per-acquisition in half. This suggests that spending more leads to more efficient customer acquisition. Of course, eventually we expect to see diminishing returns, but that limit will differ by the advertiser.

“Make new friends, but keep the old,” is the saying, which holds particularly true for AVOD services competing for viewers.

While researching the cost per acquisition costs of the various campaigns running on the VIZIO Home Screen, we were able to put a price tag on the cost of a new subscriber versus that of retaining or regaining existing and former subscribers.

Lapsed users engage more with ads and are more likely to return to the AVOD service with encouragement from advertising. And while retaining users has a cost (particularly at the growth stage), it's far less than acquiring new subscribers.

For example, we learned that it is:

This is particularly important in today’s inflationary environment. AVOD services need to ensure every dollar spent is done so as efficiently as possible. That means investing not only in content and customer experience, but in promotion and retention as well.

We live in a new age, where TV viewers don’t turn on a TV and go right into flipping channels or scrolling a menu. They are prompted with a choice first… which service to launch for their viewing experience.

That reality makes the Home Screen of the smart TV incredibly important to any content partner, but particularly so for those who rely on audiences to watch the ads they stream. VIZIO understands this, and that’s why we have multiple opportunities to promote such content on our Home Screen.

For the full results of the study referenced above, use the following form to download the complete case study.