Content consumption is on the rise across all formats.  But let’s face it—nobody is in front of their TV screen 24/7. That’s why advertisers continue to purchase inventory across multiple devices and platforms.

But integrating those cross-platform efforts with a targeting strategy that follows viewers from the TV to their other devices is even more effective, as a recent VIZIO Ads campaign using our Household Connect capabilities illustrates.

VIZIO’s Household Connect allows brands to extend their messaging efforts beyond the TV screen to the personal devices that VIZIO owners use throughout their daily digital lives. This audience-based strategy allows brands to target ads to an entire VIZIO TV household, rather than a specific device owner.

Of course this targeting applies only to those users who have opted into this feature, which many do in order to receive ads that are more relevant to them. The more relevant the ads, the more those ads feel like a feature than an intrusion.

That second-screen ad delivery is uniquely informed by VIZIO’s Inscape TV data — meaning an advertiser can target a user on their digital device based on shows or channels someone watched on their television. VIZIO can even deliver second-screen ads based on prior ad exposure.

VIZIO Ads secures third-party ad inventory with partners on both ad-supported mobile apps and mobile web browsing applications to deliver off-platform ads. These supplemental ads have a powerful, synergistic impact on recall and intent when integrated in this way.

Here’s an example. Driving viewers to a scheduled world premiere event is perhaps one of the biggest advertising and engagement challenges there is. So when a cable TV channel needed to drum up viewers for a season premiere, it turned to VIZIO Ads and Household Connect to execute a multi-pronged campaign to cast the widest net possible across programming, properties, and devices.

Taken together, 64% more VIZIO TV owners tuned in to the season premiere after engaging in one of the four promotion efforts than those who tuned in organically. But it was the Household Connect effort that had the biggest effect.

The conversion rate for viewers who engaged with Household Connect promotions was 1.4%, compared to 0.7% of the organic “control” group. Overall, that’s a 94% lift in engagement over the control group never exposed to the promotion.

The Home screen rotational ads were a close second, with a 91% lift engagement over the unexposed group. Smart TV video ads came in third at 61%, and the homescreen takeover batted cleanup at 58%.

While we’re listing all engagement rates individually for comparison purposes, it’s important to note that these promotions worked together. Seeing the ads on the homescreen first helps reinforce the message when it’s delivered on an off-screen device like a mobile phone or laptop. These efforts don’t exist in silos. 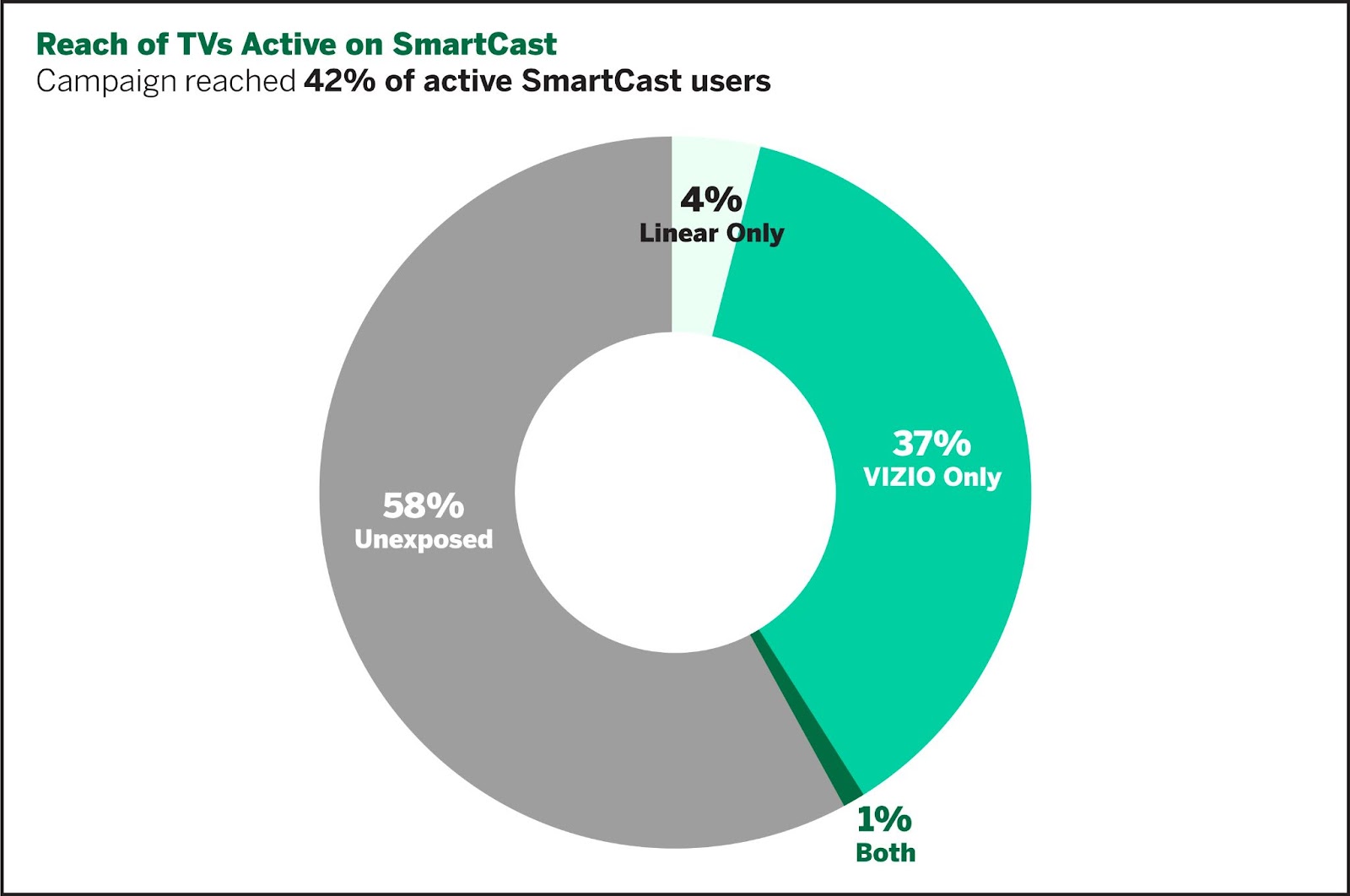 If you’d like to see more data from this case study or would like to explore how a VIZIO Ads campaign could benefit you, use the button below to request more information and a representative will reach out to assist you.